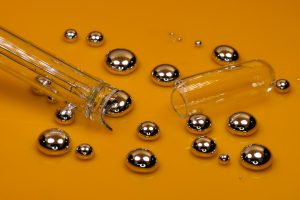 Heavy metal poisoning from cadmium, lead, arsenic, aluminum, and others, especially mercury may be more prevalent than anyone suspected. To my knowledge there have not been multiple studies on a general population to determine if heavy metal toxicities exist in a large percentage of the population. However, in 2007, 1,000 people gathered for a four day health seminar related to mercury testing. Of the 1,000 attendees, 680 men and women from the ages of 18 to 70 who lived throughout the U. S. and Canada were tested. An alarming 95% of the people tested with body mercury levels in the ‘Elevated’ or ‘Very Elevated’ reference range, and just 5% tested in the ‘Green’, or 0 reference range.

Cadmium and lead can be found in automobile and industrial vapors, and lead may come from our fillings, and lead contamination can occur from lead-based paints. Aluminum toxicity can occur secondary to exposure to aluminum cookware and cans. Arsenic is frequently found in well water. Of all these, mercury seems to be most prevalent. In 1991, the World Health Organization, conformed that, “Mercury contained in dental amalgam is the greatest source of mercury vapor in non-idustrialized settings exposing the concerned population to mercury levels significantly exceeding those set for food and for air. But “silver” fillings are not the only source of mercury. Certain types and brands of the following common products also may contain mercury: fish, thermometers, button cell batteries, skin crèmes, vaccines, barometers, cosmetics, tattoos, thermostats, light-up sports shoes, disinfectants, and fluorescent light bulbs. Exposure to mercury can occur in a number of ways. On may come in contact with mercury or its fumes from broken thermometer, and other spills in the home, school, or workplace, or breathe in airborne mercury from a coal burning power plant, mining operations, or other industrial sources. Thousands of people work in an occupation that uses mercury, such as a dental office or manufacturing plant. Millions are exposed daily by eating fish that have been contaminated with methyl mercury. In general, the larger the fish, the more susceptible it is to mercury contamination. Different regions around the world have different fish on the “consumer beware” list, but a few of the most at risk are shark, swordfish, grouper, tuna, Clilean Se Bass, marlin, tilefish, and farmed salmon. (Do not eat farmed salmon also because of extreme high levels of arachadonic acid, which causes inflammation.)

There are a number of chelating agents out there to determine heavy metal toxicity, two of which are DMPS and DMSA. For mercury, cadmium, and lead, we like DMPS because approximately 50% of oral administered DMPS is rapidly absorbed in the gastrointestinal tract and is excreted by the kidneys. The highest urinary concentration occurs 2-3 hours after oral administration. Neither DPMS nor its metabolites are detected 12 hours after administration in animal studies. DMPS is the most productive agent for the provoked urine toxin element , particularly when mercury is of concern. Only about 20 % of DMSA is absorbed into the gastrointestinal tract. Studies perform at Doctor’s Data Laboratory indicate that oral DMSA (30mg/kg/day) for 1-3 days only yields about 1/5th to 1/10 of the amount of mercury in the urine as a single dose of DMPS. Therefore, many physicians prefer DMPS instead of DMSA for the initial challenge and subsequent detoxifying agent for mercury. For heavy metals other than mercury, cadmium, or lead, we prefer liposomal EDTA for detoxification.

What does mercury do to the body? Mercury is a toxic heavy metal that is not found naturally in the body. In fact, it is a poison that can cause long-lasting damage to the body. According to the World Health Organization, ”Recent studies suggest that mercury may not have a threshhold level in which some adverse effects do not occur.” The following are a few health issues that have been linked to mercury exposure: Emotions; rage and anger, depression, mood swings, anxiety. Reproductive System; infertility, impotency, birth defects. Hormones and Sexuality; low thyroid function, low libido, erectile dysfunction. Heart; arrhythmia, shortness of breath, , angina, heart failure. Brain; “brain fog”, dementia, Alzheimer’s, “senior moments”. General Health; fatigue, unexplainable weight gain, cold extremities, headaches. Immune System; recurring infection, autoimmune disease, rashes, allergies/asthma. Nervous System; numbness, tremors, neuropathy, vision/hearing problems, MS or ALS.

Detoxification length is dependent upon test levels and individual response to treatment. However, in the outcome of one group of 147 individuals using DMPS for mercury toxicity, 63% or 93 out of 147 obtained an elimination average of 69% in 30-60 days.

This service is provided through Hoffman Clinic for Optimal Health.For more information about testing procedures and cost, contact our office, 813-985-5190.