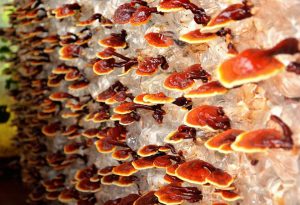 Some of the other names for this incredibly powerful food is Ling Zhi, which means ‘spirit plant’, “ten thousand year plant”, “mushroom immortality”, because of it seems to promote longevity, “varnished conk” because of its shiny appearance, and “phantom mushroom” because of its scarcity. The Latin name for the reishi mushroom is Ganoderma lucidum. Gan means ‘shiny”. Derm means “skin”.Lucidum means “brilliant”. The reishi mushroom is known as” the king of all herbal medicines”. Professor Hirosoki Hikino, University of Tohoku, Japan is “one of the most important elixors in the Orient”.

In 1995, researchers were able to isolate DNA of Gandoderma tsugae and Granoderm lucidum. These two species are very hard to differentiate. More recent studies have classified Ganoderma lucidium from Asia as its own group. Ganoderma lucidum from Europe and the Americas is more closely related to Ganoderma tsugae. Therea re two different types of reishi mushrooms, one with the traditional wide, shelf-like fruiting body, and the other was an antler-shaped and known as Rokkda-Reishi. The Rokkda-Reishi was avidly coveted by the ancient Taoists. This type of mushroom appears prominently in art-work dating back centuries. The two types are rumored to have different healing properties. However, the two type have essentially the same pharmacologically active compounds. The reishi mushroom is not a culinary mushroom, as it has a very bitter, woody taste. The reishi mushroom is taken strictly for medicinal purposes. It contains 119 different triterpenoids that are anti-inflammatory, anti-tumor, and anti-viral in effect.

Reishi: Anti-Asthmatic. A recent study at Mount Sanai Hospital, New York, utilized the Chinese formulae (ASHMI) in which Ganaderma lucidum was the prominent active factor was found to be just as effective as systemic corticosteroids to control asthma. The authors concluded that this herbal medicine, reishi, was a safe and effective alternative for the treatment of asthma. ASHMI had no adverse effect on adrenal function, and had a beneficial effect on T lymphocytes balance. Other uses for reishi are for the alleviation of symptoms associated with stress, as a tonic, can build energy and increased stamina, and works as a sedative for short term. It is believed that vitamin C increases the absorption of reishi so many doctors and herbalists recommend Vitamin C in conjunction with the mushroom.

Reishi in the wild is found in the dense, humid coastal provinces of China, and favors the decaying stumps of chestnut, oak, and other broad leaf trees. In Japan, reishi is usually found in old plum trees. Reishi is a kidney shaped cap that does not lose its shape after drying. It comes in six colors; red, white, blue, black, yellow, and purple. It is now extremely rare and difficult to find in the wild. It takes the right combination of oxygen and moisture for germination to occur. Reishi can be cultured in old logs that are buried in shady, moist areas.

History of reishi. Taoist priests in the first century were the first to experiment with reishi included the mushrooms in magic potions that granted longevity, eternal youth, and immortality. Reisi is placed in China’s oldest material medica, the Herbal Classic (about 200 C.E.). This text divides 365 herbs into 3 categories; superior, fair, and average. Under the category for superior, reishi held first place above ginseng. To be rated in the superior category, an herb must demonstrate potent medicinal qualities, produce no ill-effects or side effects when taken for long periods of time. The Herbal Classic says of reishi, “The taste is bitter, its atmospheric energy is neutral, it has no toxicity. It cures the accumulation of pathogenic factors in the chest. It is good for the Qi of the head, including mental activities. It tonifies the spleen, increases wisdom, improves memory so you won’t forget. Long term consumption will lighten the body, you will never become old. It lengthens years. It has spiritual powers, and it develops spirit so that you become a “spirit being like the immortals”.

Reishi and Chinese Art. The reishi mushroom is a symbol of good health and long life. Depictions of reishi are found on the doors, archways, and railings throughout the Emperor’s residencies in The Forbidden City and The Summer Palace. In the general population, images of reishi appears to have been used a good luck charm or talisman. Pen-and-ink drawings, tapestries, paintings, jewelry and jade pieces were made in the image of the reishi mushroom. Kuan Yin, the Chinese Goddess of Healing and Mercy, is sometimes depicted holding a resishi mushroom.

Research studies on reishi. Reishi has been a part of Chinese pharmacopeia for many centuries. Numerous studies began in the 1980’s for many different applications.

Reishi and Skin Cancer. Korean scientists isolated DNA and then placed the DNA in a reishi extract and exposed to ultraviolet radiation. The scientists concluded that resihi shows “radioprotective activity”, guards against DNA damage. Eating reishi can slow the aging of the skin, and protects against skin cancer. Chinese women take reishi to keep their skin beautiful. Reishi is contained in many Japanese patent formulaes for hair loss.

Reishi and Radiation Therapy. Scientists at Heber Academy of Medical Sciences at Shuijiazhoung, China conducted an experiment where they irradiated mice that had been fed reshi mushrooms. The mice fed reishi mushrooms did not have decreased white blood cells, and there was an improved survival rate for the mice fed the reishi. Reishi improves immune function by keeping production of the white blood cells from dropping in spite of the radiation.

Reishi and Tumors. Scientists in Taiwan isolate polysaccharides from reishi and tested them in vitro. The scientists discovered macrophages, monocytes, and T lymphocytes all increased the production of tumor necrotic factor, alpha, interleukin-1-beta, interleukin-6, but all within high normal range. This demonstrates the immunomodulating characteristics of reishi, revving up the immune system but doesn’t overstimulate activity. Reishi inhibits angeogenes in prostate cancer, by modulating specific signaling. Reishi was one of eight herbs used in a formulae known as PC-SPES, which showed much success against prostate cancer. It is believed that reishi can induce production of natural chemotherapy agents such as interferon, interleukin-1, and interleukin-2. Reishi inhibits the growth and increases the activity of polymerization in bladder cells in vitro. It inhibits growth of breast cancer cells by modulating some signaling, making it an effective dose-dependent adjunctive therapy. An extract from Ganoderma lucidum was shown to inhibit the growth of human liver cancer cells. Researchers found the active compound in the polysaccharides of the reishi extract as the active mode of action on cytokine expression. Various immune cells have been found to be activated by this compound found in resihi polysaccharides. Natural killer cell mediated cytotoxicity was found to be greatly enhanced, and was shown to effectively kill tumor cells.

Reishi As An Anti-Oxidant. Scientists at Chines University of Hong Kong isolated substances in reishi that belong to the triterpene group, ganoderma acids A, B, C, D, glucidenic acid B, and gamodermatrol, all very powerful anti-oxidants. In 2004, a double blind placebo-controlled cross over study conducted at Hong Kong Polykachen University investigated the effects of 4 weeks of reishi supplementation as an anti-oxidant for patients with coronary heart disease risk, DNA damage, immune problems, inflammation, markers for liver and renal toxicity. The follow up study showed that anti-oxidant levels in the plasma after reishi ingestion. Ten day supplementation was associated with improved markers in the coronary heart disease biomarker profile. In another study, fasting blood and urine samples were taken from healthy adults before and after 4 weeks of reishi supplementation of commercially available product at 1.44 grams reishi/day, equivalent to 1.2 grams of fresh mushrooms/day. A slight trend toward lower lipids was seen, the anti-oxidant capacity in urine increased. No evidence of liver, renal, or DNA toxicity with reishi intake. Anesthesiologists at Mackay Memorial Hospital, Taipei, Tawain, recently demonstrated that extract of Ganoderma lucidum had anti-oxidant effect against heart toxicity, and works as a superoxide scavenger of free radicals.

Reishi And Infection. There have been a number of substances extracted from the reishi that have shown interesting anti-infective properties. Protein designated ganodermin is a potent anti-fungal agent. Proteoglycan is active against herpes simplex virus type 1 or type 2 by interfering with specific events that inhibit the absorption, entry into target cells, Ganodermadiol has been shown against HSV-1, causing lip blisters.